Jurassic World Evolution released on June 12, 2018 on PC, PlayStation® 4 and Xbox One. As announced on the GamesCom 2017, the gamers will have the chance to build their own fantastic Jurassic World, and bring back dinosaurs like the mighty T-Rex, Velociraptors and more. 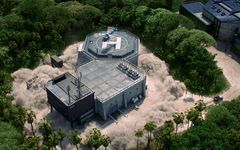